Former professional rugby player John was 18 years old when he broke his neck during a tackle. He was playing his first game for Oldham Rugby League Club’s under 19 academy side in 1995. The life-changing spinal cord injury left John in a wheelchair and unable to walk.

John is one of Physio Matters’ earliest clients, with our Director Colin Green first treating him in 1999. John’s rehab treatment initially consisted of working on him being able to stand with full leg splints, which also involved an orthotist. This progressed to walking between parallel bars, and then using a walking frame. Throughout John’s treatment, consistent core stability work has underpinned his progress, which means engaging core muscles, abdominals, and back extensors as much as his spinal cord injury will allow.

Ongoing rehab treatment has involved stretches, postural work and general cardio fitness. Over the years, Physio Matters has also helped John with a number of sporting achievements, including supporting him to gain the Guinness World Record for the fastest upper limb marathon on a rowing machine. John has also completed a half marathon in his wheelchair at Silverstone racetrack.

During the 20 years Physio Matters has been treating John, he has become an expert in the technical sector. He earned a Degree in Computer Leisure and Entertainment, and a Master’s in Computer Games. He now works as a Software Developer with a global sports merchandising company.

John also got married and has 3 children. In fact, our Clinical Director Colin Green was invited to the wedding and helped John to stand up so he could take his vows next to his bride Julie!

After many years of physio and hard work, John can now walk with assistance and support from a leg calliper. He lives in a specially converted bungalow and drives an adapted car. He has been supported throughout by Try Assist, the Rugby Football League’s Benevolent Fund, which installed a physiotherapy room at his home, funded equipment such as a special cycling machine to strengthen his legs, and installed a ramp at the front door. Try Assist also funded a device which gives more power to John’s wheelchair so he can go on country treks with his family.

Watch John explain how Physio Matters’ treatment has helped improve his quality of life, as our Specialist Neurological Physiotherapist, Elaine O’Flaherty, takes him through a virtual physio rehab session and explains the many benefits of online treatment for clients during Covid-19 restrictions.

Due to social distancing and lockdown, we can only show John at home rather than doing external activities, but eventually he will be back enjoying his wheelchair racing and exploring the countryside. 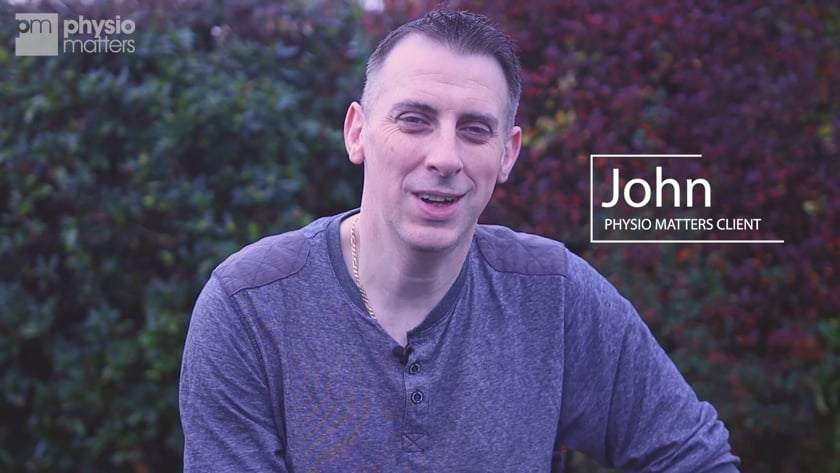