Congratulations to our client Ernie, age 67, who has finally been able to move into his own home, having spent 6 and a half years in his care home and holding the accolade as its longest standing resident.

After suffering from multiple strokes, Ernie’s family asked for our help with Physiotherapy to enable him to regain his mobility.

Ernie was determined to get back on his feet. After 2 years of hard work and perseverance, and a commitment to participate in our physio sessions and complete the exercises we set as part of his rehabilitation, Ernie’s movement improved significantly. Eventually, all involved agreed it was time for him to make a new start and move out of the care home and into his own flat.

Physio Assistant Jack Collins has been working with Ernie and said: “We are so pleased for Ernie and proud of the progress he has made. He has worked really hard during the time spent with us, and regularly used a floor bike in his room for additional exercise. As his confidence has grown, the prospect of living independently became less of a distant dream. It helped to motivate him and became a focus he could work towards.”

With the support of his family and social worker, Ernie has now been able to move into independent living flats with likeminded people of a similar age. Even better, as an Oldham Athletic FC fan, Ernie is now just a stone’s throw away from their ground at his beloved Boundary Park. 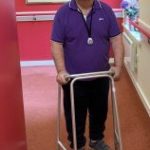 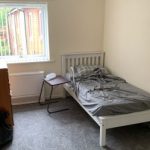 Don’t just sit in your chair

Ernie explained what his new accommodation means to him: “I have really been looking forward to the increase in my independence. And having my own place with much more space. In the new flat, I have my own kitchen, living room, bedroom and bathroom which is wonderful as it gives me much more room.”

He added: “I’d like to thank Physio Matters for all their help. My rehab has been a long journey and hard work at times but it has been worth it. If I could talk to my old self, I would say to him ‘Don’t just sit in your chair all day feeling sorry. Get up and do as much exercise as you can to try and get better’.”

And Ernie’s final advice? “Always look on the bright side, things can only get better.”