“Absolutely loved it!” and “the best day of my life, apart from my children being born!” said our client Mark, who recently took part in The Staysure PGA Seniors Championship. For Mark, this was the culmination of 7 years of rehab, physiotherapy, and golf practice.

“I can finally play golf like I used to before the accident,” said Mark who had a traumatic brain injury in 2015 following a motorcycle accident when he was struck by two cars.

“When I first tried to play after my accident, I didn’t dare swing a club for fear of losing my balance. But typical me, I never give in. I can’t believe where I was then to where I am now, from not wanting to leave the house then to not wanting to stay in now! Rehab is hard work but you’ve just got to do it.” 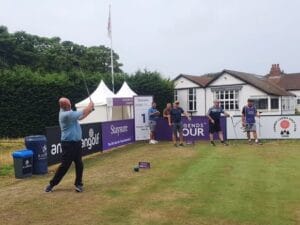 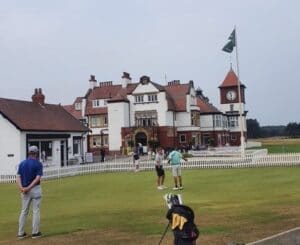 The Staysure PGA Seniors Open Championship, also called The Legends Tour, is a high-profile golf tournament which took place at Formby Golf Club this summer. It features professional, amateur and celebrity golfers and includes a Pro-Am Competition prior to the main tournament as well as a Celebrity Pro-Am Day.

Mark is Physio Matters’ Ambassador for Golf and took part in the Pro-Am Competition with his friends Gary Jacques and John Conway, who went to visit Mark in Salford Royal Hospital when he was in a coma after his accident.

Mark spotted quite a few celebrities at the tournament, including Liverpool FC footballer Robbie Fowler who was playing in the group in front of him, and jockey Sir AP McCoy in the group behind. Comedian Dom Joly was also next to them on the driving range. Other celebrities taking part in the event included Vernon Kay, Sir Andrew Strauss, Alan Hanson, Teddy Sheringham, Lord Botham and Anton du Beke. 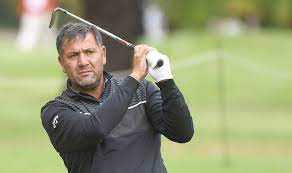 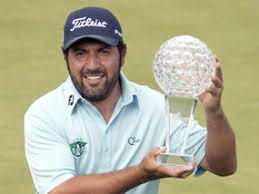 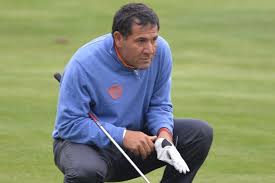 On Competition Day, Mark’s group was joined by Argentine professional golfer, Ricardo Gonzalez. He has accumulated four European Tour wins, won many tournaments in South America, and represented Argentina at the World Cup four times, most recently in 2007.

“After breakfast, we had an hour and half to practice on the driving range and putting green before we headed on to the golf course to play 18 holes with Ricardo on our team,” explained Mark. “It was an amazing experience and I absolutely loved it!”

The competition was followed by a presentation and dinner, and Mark also received a goodie bag with golf balls, tees, a T-shirt, gloves and a bottle of gin. In the end, Robbie Fowler’s team won with 111 points while Mark’s team gained a respectable 86 points and came 10th out of 30 teams.

Best day of my life

“It was the best day of my life, apart from my children being born!” said Mark. “I’ve been playing and practicing really hard over the last 2 months to prepare for the competition. The whole day was 10 out of 10 from start to finish. I’m still smiling about it now.”

‘I’ve had a lot of help and support from Physio Matters throughout my rehab,” said Mark. “I’d really like to thank them for helping me to get where I am today, back playing golf with professionals like I used to before the accident. I’ve been treated by a number of Physio Matters’ physios over the years including Colin and more recently, Kat. It’s been a long journey but with their help, it has been worth it.” 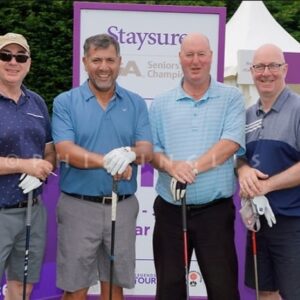 “One of my proudest moments was hearing Ricardo, a multi-millionaire professional golfer, say to me “you can really play golf Mark” and tell me how good my ‘tempo’ was,” added Mark. “I was really proud of myself when I heard that, especially after everything I have been through and all the hard work it has taken me over the years to get here.”

Mark enjoyed his experience so much that he wants to play again next year. “I would definitely, definitely do it again,” he said. “We have already asked the organisers if we can have Ricardo on our team again too. He was great to play with and made our day even extra special.”

Mark is Physio Matters’ Ambassador for Golf and encourages and support others with neurological conditions such as brain injury to take up golf as part of their rehab. To find out more about golf or the other sports and activities we offer as rehab, visit our Physio Active page, or speak to your Physiotherapist. You can also contact us on 0161 681 6887 or email: office@physio-matters.org