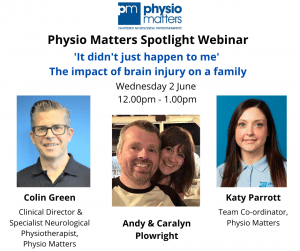 The webinar “It didn’t just happen to me – the impact of brain injury on a family” took place on Wednesday 2 June 2021 and the video is available to watch below.

The webinar was co-hosted by Physio Matters’ Clinical Director, Colin Green, and Team Co-ordinator Katy Parrott who shared her own experience of having a stroke when she was in her twenties and the impact on her and her family.

A brain injury doesn’t only affect a patient, but all the people around them. In the webinar, former Physio Matter’s client Andy and his wife Caralyn talk frankly about how Andy’s brain tumour diagnosis impacted on their relationship and family life.

Andy was diagnosed with a brain tumour in April 2015 at the age of 40. He needed an 11-hour operation which involved removing a portion of his skull, followed by radiotherapy and chemotherapy. The treatment left Andy with difficulties moving his hands and feet, and unable to walk. 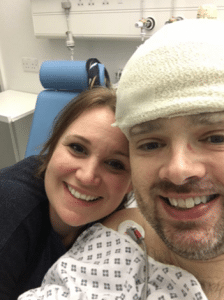 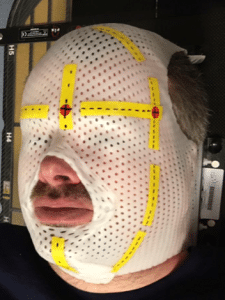 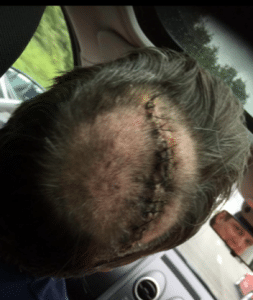 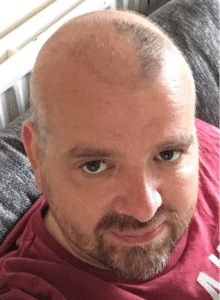 Physio Matters started rehabilitation work with Andy in August 2015, initially focusing on helping him learn how to stand and walk again, indoors at first and then eventually outdoors. At first Andy was able to stand, then walk and eventually run. In October 2018, Andy completed the Manchester Half Marathon, raising nearly £1700 for The Brain Tumour Charity. He returned to work at Manchester University as an Operations Manager in the School of Health Sciences, and regularly walks to and from his home to the local train station to get to work. 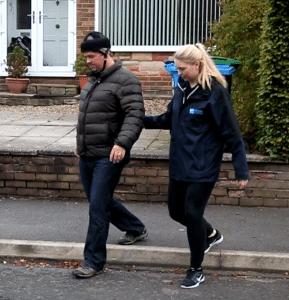 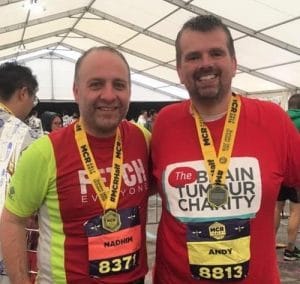 In the webinar, Andy and Caralyn discuss their personal experience of Andy’s diagnosis and recovery, and the condition he is still living with today.

“Telling my family about the brain tumour was the hardest thing. I would rather go through the surgery again then tell them that. It was hideous,” said Andy.

“Brain surgery, radiotherapy and chemo were very hard to go through. My immediate problems after all the treatment were physical and I had good physios at Physio Matters for over 6 years, helping me learn how to stand and walk again, even run,” he explained.

“However, no-one sees the issues you have as a couple afterwards. There are no pathways or ways to measure your progress. The main problem is fatigue, especially cognitive. I had to be in bed by 7.30pm which affected family life. I missed out on my young kids’ lives but Caralyn had to do all of it alone.”

Caralyn explained that while friends and family were a great support in the first year, things changed as Andy’s recovery improved.

“People were very supportive when we needed it, but as things got back to normal, the support withdrew as people assume you are OK. Andy could walk again, even go back to work. So it looks like everything is fine again, but it’s not. We needed help later. It would have helped if we had talked to someone together as we both had issues in looking after the kids. There were arguments of course, and Andy had become very sensitive to any noise, even opening a bag of crisps, which led to irritability with the kids. So we’ve had to rejig how we work as a team.”

Caralyn also explained how important it was to have someone to talk to, outside of the family. “You feel like you are moaning if you say things are tough. It’s about having the right support network. I found having someone not close to Andy that I could talk to was important, so not family really. You need a safe place to moan without people judging you. It’s important to be able to let off steam and talk about what might seem trivial issues and not be judged for it.” 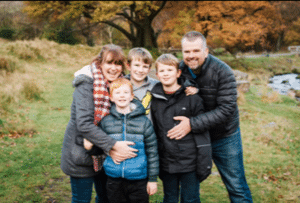 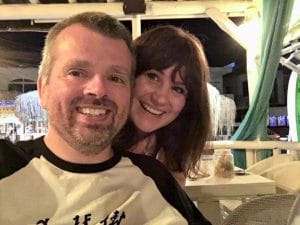 Andy and Caralyn are due to celebrate their 20th wedding anniversary this year. Six years on from the diagnosis, they agree that their experiences have brought them closer together, but that it has been a tough time for them, their children and their families. They agree that the impact of brain injury spreads much wider than the person diagnosed.

To watch the full video and hear Andy and Caralyn discuss their experience of brain injury, click below. The video is 56 mins long.

If you have any queries about this video or want to find out more about how Physio Matters can help with brain injury rehabilitation, please contact: office@physio-matters.org 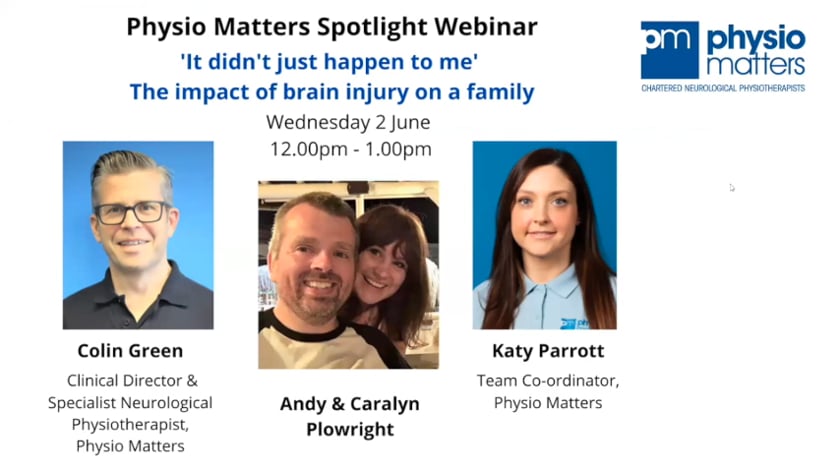