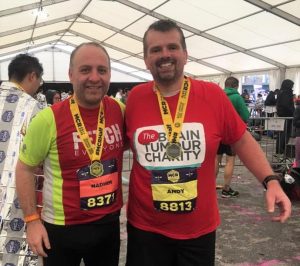 Congratulations to our client Andy Plowright who completed the Manchester Half Marathon on 14 October 2018 in 2 hours 10 minutes and raised nearly £1700 for The Brain Tumour Charity – an amazing achievement given that Andy himself was diagnosed with a brain tumour only 3 years ago.

Since then Andy has been undergoing rehabilitation treatment with Physio Matters, who have helped him regain his mobility, and ability to stand, then walk and eventually run.

“Running the half marathon was a brilliant experience,” said Andy. “I was dreading it on the start line but ended up absolutely loving it. It just felt good the whole way round. I hadn’t run more than 10 miles before so I can’t quite believe I had so much in the tank.”

“I had a really good friend running with me, Dr Nadhim Bayatti, who helped keep me safe in the chaos of the first and last few miles,” he explained. “My plan was to run it in under 2 hours 30 minutes, so I was delighted to finish even faster. I was reeling people in with a big smile on my face for the last mile or two!” 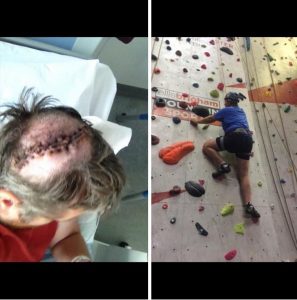 Andy was diagnosed with a brain tumour in April 2015 at the age of 40. The operation to remove it involved partially removing a portion of his skull, and was followed by radiotherapy and chemotherapy. The treatment left Andy with difficulties moving his hands and feet, and unable to walk.

Physio Matters started rehabilitation work with Andy in August 2015, initially focusing on helping him learn how to stand and walk again, indoors at first and then eventually outdoors. This was followed by balance and strength work, and tackling stairs. As Andy progressed, Physio Matters worked with him to recover his stamina and improve his walking ability, so much so that Andy was able to walk from Uppermill to Greenfield to catch the train to work in Manchester. 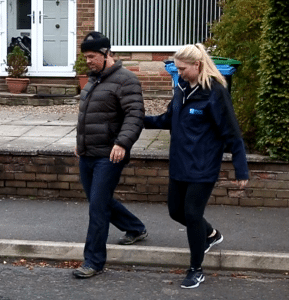 To further improve his fitness, Andy then took up running. He joined Greenfield Greyhounds, a running club for beginners which helps people build up to running a 5k, and then progress to 10ks, half marathons and further. Set up by Colin Green, Clinical Director of Physio Matters who is also a keen ultra-runner, the club has helped over 500 people to start running.

Colin said: “We are really proud of all that Andy has achieved. I’ve always been impressed by his determination and positive attitude. As his physio team, it has been very rewarding to see how much he has improved and how hard he has worked during his rehabilitation to get to this point. He’s a real inspiration and I’m delighted with his success.”

Andy lives in Uppermill, Saddleworth, with his wife Caralyn and young family, and works as an Operations Manager in the Division of Pharmacy and Optometry at the University of Manchester. He’s already signed up for the next Manchester Half Marathon, as well as the Liverpool Half Marathon, and hopes his example can help others in their rehabilitation journey.

“Words can’t express my gratitude for what Colin and his brilliant team have done for me since my brain surgery. Such a friendly, knowledgeable and professional bunch. I’ve gone from cautiously shuffling around my living room to training for a half marathon thanks to the care I’ve received and the customised rehab plans and exercises they’ve provided.

“I hope my run can motivate other people who have had a similar life-changing illness or injury. Thanks to Physio Matters, I’ve been able to improve my mobility so much. Rehabilitation is hard work but if I can do it after what happened to me, then anyone can. There is still a lot you can achieve – just give it a go!”