Last week was a special moment for the Physio Matters team as our client, 90-year-old Kathleen, was discharged from the care home she had been temporarily residing in. Kathleen is delighted to return to her home this week, after she suffered a painful fall three months ago, leaving her hospitalised at the end of April. Her son, David Courtman, took the time to speak to Physio Matters to thank us for the progress his mum has made.

The need for physiotherapy
On the 23rd April Kathleen had planned to visit her friend and had ordered a taxi to transport her. Upon leaving the taxi, Kathleen stumbled and fell backwards, causing her to land on her left-hand side, leaving her in excruciating pain. After being rushed to Oldham hospital and then transferred to Salford Royal due to concerns over Kathleen’s wellbeing, doctors informed Kathleen that she had fractured her pelvis in six places and broken her left humerus. The professionals at the hospital also voiced concerns that once Kathleen was discharged from hospital, she would need extra care, and therefore would need to move into temporary nursing accommodation.
Kathleen’s son David outlined that the temporary accommodation Kathleen was in had referred her to a community physio. However, the wait to be assessed by a community physio in that area was at least three weeks, offering only one short session per week. David personally felt that the lack of consistent treatment whilst his mum was immobile would have been detrimental to the quality and speed of her recovery. He therefore took matters into his own hands, and contacted a local sports physio, who recommended Physio Matters.

Efficient service
Upon getting in contact at the beginning of June, David praised Physio Matters’ quick response: “I phoned up on the Friday and spoke to Colin (the Clinical Director), and by the following Monday my mum had already been assessed by the Physios and booked in for another session.”
Whilst Colin assessed Kathleen, he was vocal about how impressed he was with her strength, and gave David reassurance that with the right rehabilitation, Kathleen would be able to regain confidence in her walking.

A walking success
Fast-forward a month later to the present, Kathleen has begun to regain her confidence and strength in walking – so much so, that she has been assessed and deemed fit enough to be discharged from the nursing home. She is preparing to move back into her home this week.
David says his mum’s quick and effective recovery is all down to Physio Matters: “you guys came at just the right time. Your help has been amazing. I would say she’s walking more now than she ever was before.” 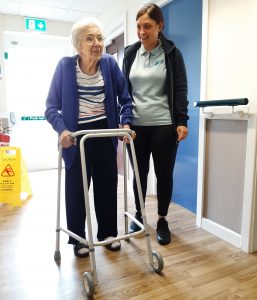 Grateful thanks
David also also added: “Hopefully when my mum is back home and even more confident, she will go back to her normal self. I just want to give my grateful thanks to you all because you couldn’t have helped more. You’ve done anything we have asked, and without you, my mum definitely wouldn’t have progressed as well as she has without your help”.

We wish David and Kathleen all the best upon her return home!